Basically, Jason Woofenden complained a lot about how computers worked. At one point he realized that with a nice virtual machine, he could pretend that computers worked the way he wished they did, and live happily ever after.

Fronds is basically an operating system which runs on a very simple virtual machine called fovium.

#1 Build Fronds into a powerful, efficient, and fun programming environment.

#2 Use that programming environment to expand the interface and capabilities to be able to do many useful things besides programming.

Fronds strives to be efficient, easily habituated and easy to use. Many ideas from The Humane Interface will be incorporated.

Fronds is in very early development. It is not the least bit useful yet. The assembler and compiler are working. It can compile itself and provides a simple interactive environment. The editor is in progress. 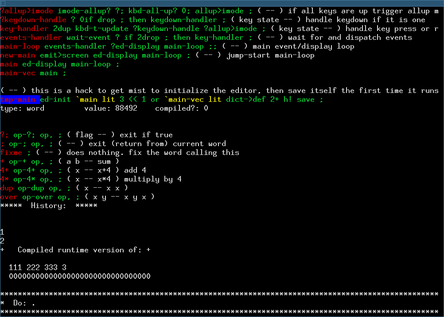 Above, I've typed . and not yet let go of the space bar. When I do it changes to look like this: 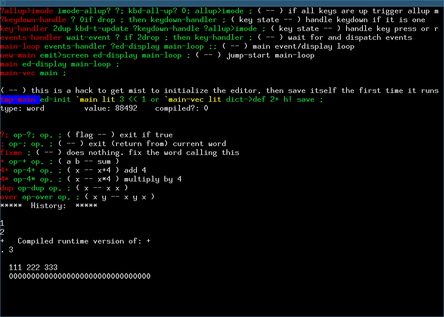 Fronds started off as a forth IDE for PPC GNU/Linux called herkforth.

Jason Woofenden wrote a cross compiler in herkforth to output the Fronds binary. This binary is run under fovium. All development of Fronds happens in herkforth, and will continue that way until the Fronds editor is complete enough to sustain its own development. (At which point there will hopefully be much fanfare and a binary release for windoze and hopefully Mac.)